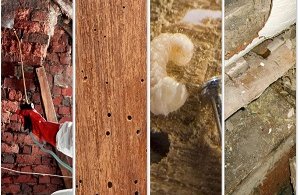 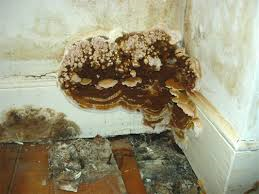 You may not realise that you have a wood boring problem until the resulting damage becomes visible, so early identification is key before they cause more harm.

Different wood boring insects prefer different types of woods, which will help you to identify what sort of woodworm is causing your problems.  Some prefer softwoods like pine, spruce and cedar while others like hardwoods such as oak, ash, sweet chestnut and mahogany. Whatever the species, all of them will leave some signs, if you have an active woodworm infestation.

Dry rot and wet rot can affect buildings of all ages and if decay is discovered it should be identified and remedial action taken without delay.

Fungal decay occurs in timber which becomes wet for some time and is the result of the attack by one of a number of wood-destroying fungi. The most well known are Serpula lacrymans – the true dry rot fungus, Coniophora puteana the Cellar fungus and Poria vaillantii the Pore or Mine fungus. Many other fungi also occur and some have recently been particularly linked with decay in door and window frames.

Dry rot is only caused by Serpula lacrymans and is the most serious form of fungal decay in a building. It can spread onto and destroy much of the timber. Wet rot occurs more frequently, but is less serious; decay is typically confined to the area where timber has become and remains wet.

Fungal decay always arises because the wood has become wet, usually timbers will be in excess of 20 per cent moisture content. Finding the source of dampness and eliminating the ingress of moisture and promoting drying is always necessary.

Outbreaks of dry rot and wet rot start in similar ways. The mature fruiting bodies of wood-destroying fungi that develop during an attack produce millions of microscopic spores and these are widely dispersed by air currents. If they fall on untreated damp wood they will germinate by pushing out a hollow tube called a hypha which grows and branches to form a mass of hyphal threads called mycelium. Mycelium develops inside the timber and breaks down the wood for food. The timber may darken in colour and develop a characteristic cracked appearance. Some wet rots may result in bleaching of the wood; these are more common in doors and window frames. Eventually, the wood loses its strength and in some situations may become dangerously unsafe.

The main differences between dry rot and wet rot are the degree of development of mycelium on the wood surface and the ability of the fungus to spread into other timbers via adjacent masonry. It is important that the two types of decay be distinguished since they require different treatment.